A BRIEF HISTORY OF TAEKWON DO

Approximately 1300 years ago, (during the 6th century A.D.) the Korean peninsula was divided into three kingdoms: Silla, Koguryo, and Baek Je. Silla, the smallest of these kingdoms, was constantly under invasion and harassment by its two more powerful northern and western neighbours. During the reign of Chin Heung, twenty-fourth King of Silla, the young aristocrats and warrior class formed an elite officer corps called Hwa Rang-Do. This warrior corps- in addition to the ordinary training in spear, bow, sword, and hook- also trained themselves by practicing mental and physical discipline, and various forms of hand and foot fighting.

To guide themselves and give purpose to their knighthood, they incorporated a five-point code of conduct set forth by their country’s greatest Buddhist monk and scholar, Won Kang: 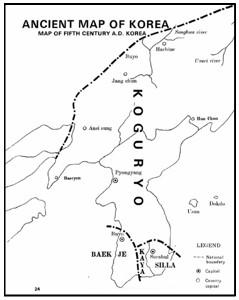 The Hwa rangdo became known in the peninsula for their courage and skill in battle, gaining respect from even their bitterest foes. The strength they derived from their respect to their code enabled them to attain feats of valor that became legendary.Many of these brave young warriors died on fields of battle in the threshold of their youth - as young as fourteen or fifteen years of age. Through their feats, however, they inspired the people of Silla to rise and unite. From the victories of Silla, the Korean peninsula became united for the first time in history.

It appears that the warriors of Hwa rangdo added a new dimension to this national art of foot fighting by gearing it to a combative art and infusing the principles of the Hwa rangdo. The new mental concept as well as physical elevated foot fighting to an art and it became Soo Bak-Gi.

The Silla and Koryo marked a flowering of the martial arts in Korea. Soon after, however, the dynasties acquired and anti-military posture. Though this began a period of civil enlightenment, anything dealing with the military was debased. By the end of the Yi Dynasty the martial arts appeared to have ceased existing. The final blow came with the Japanese occupation (1909-1945), when it was forbidden to practice any of the martial arts. Taek Kyon was secretly practiced by some dedicated stalwarts and passed on to a handful of students. Proponents of the art. such as Song Duk Ki and HanⅡ Dong, managed to keep the art alive. With the liberation of Korea in 1945, the new Republic of Korea Armed Forces was organized on January 15, 1946. A young Second Lieutenant, Choi Hong Hi, recently released from a Japanese prison camp, began teaching his martial arts to some of his soldiers. The rest is history, resulting in what is today known throughout the world as Taekwon-Do.